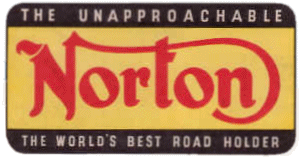 This 1947 350cc Manx Norton was first owned by South Islander Jim Swarbrick who was known as the flying milkman. He entered it in the 1947 Manx GP but never started the race due to a crash in practice. He returned to New Zealand where the Norton was raced by him for a while and then passed to Tom Lamberton, a baker of Hamilton, who used it for a number of years mostly in beach-racing events until it became uncompetitive and was put into retirement. It was that it was purchased by its current ownerís father Bill Holmes in 1965 and was never used as a complete bike. The front wheel and motor were placed into a Featherbed frame and used briefly before it then sat around in parts.

In 1986, it was inherited by the current custodian who undertook a complete restoration. It was raced three times during the early days of the Pukekohe Classic race meetings. The machine offers a bronze skull in the cylinder head and is fitted with 19-inch wheel rims as it became impossible to source tyres for the original 20-inch rims. The carburettor has also been changed from the original remote needle TT to the easier-to-tune TT9 model; the original carburettor is with the machine. Soldered on the underside of the fuel tank are the scrutineering tags from the 1947 Manx Grand Prix, the first to be held after the war. The left-hand side has 94 over 350 meaning entry #94 in the 350cc race or Junior as it was known then. The right-hand plate has MGP over MAY 47 over 4 3/4 GAL. The engine and frame numbers are matching B10M 10157.

This is a remarkable example of one of the greatest names in historic performance racing. Continually developed over three decades, the Manx continues to reek of pure single-mindedness.