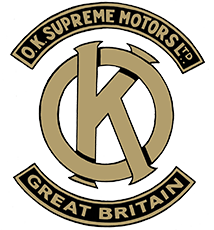 OK-Supreme 1935 High Camshaft
OK-Supreme motorcycles were manufactured in Birmingham from 1926 to 1940, the company formed by Ernie Humphries after a partner left the OK firm.

The OK Supreme Company of Birmingham was a family concern of father Ernie Humphries, son John and daughters Freda and Alice.

It was established in 1926 when Humphries and his partner Fred Dawes split after making O.K. machines from 1911 - Dawes deciding to focus on bicycles. The Humphries firm designed an attractive range of sporty machines mostly fitted with JAP engines.