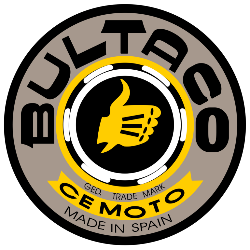 
Reg Number:N/A
Frame Number:B-4903149
Engine Number:M-4903202
Body Colour:Red
Cc:250
MOT ExpiryDate:N/A
Bultaco had benefitted from the input of the Rickman brothers when developing their early motocross models and repeated the pattern of employing an established star and development engineer when they entered the trials arena by retaining the services of Sammy Miller. The result was introduced to the world on the 16th January 1965 when the first Sherpa T, powered by a 250cc version of the San Antonio 1 engine and fitted with a four speed gearbox was unveiled. 1967 saw the introduction of a revised model with a five speed gearbox and 35 mm diameter stanchions, however for 1968 a completely revised machine, with a new frame, exhaust system and a new tank and seat unit was introduced, running until 1971, to be followed by the by the fourth series in 1971 that introduced the Kit Campeon Profesional seat and tank unit. Manufactured in fibreglass this assembly greatly reduced the width of the motorcycle easing its use in sections. The fourth series also marked the introduction of the larger displacement 326cc Sherpa.

This example of a Kit Campeon equipped Sherpa is offered in good overall condition and would make an ideal mount for twin shock events.
Image and description kindly supplied by H&H Classic Auctions