DKW has always been ahead in the design of 250 c. c. motorcycles. In 1927 the factory introduced the first E 250. Since then many hundreds of thousands of machines of this size have been built and a number of international races and world championships have been won.

Looking back to-day on the development since 1927 one can clearly see two vitally important factors: Firstly, the traditional principle to build slow-revving, economical and sturdy DKW two-stroke engines, and secondly, the endeavour steadily to increase the performance and the speed of the machines.

Surely it would have been easier simply to trim up the engines, a method which would undoubtedly have produced more power and a higher top speed. But what is the good of such development if it is combined with a reduction in economy, reliability and resistance to wear? DKW was convinced that on the basis of its traditional development and research work it would obtain equal and even better results than by simple "trimming," because one knew very well that there was still much to be expected in the way of performance from the two-stroke engine. Since 1927, for example, the performance of the 250 c.c. class has been increased from 6.5 BHP on the E250 to 14.1 BHP on the new RT250 with practically no increase in engine speeds. The maximum road speed of the motorcycle has been increased by approximately 50%.

Could there be a better argument for proved design of this new model? The development of performance was aided considerably by the newly designed intake- and exhaust-silencers, both units being in perfect tune with each other. Furthermore, an additional advantage was gained by these new silencers as they made it possible to reduce the exhaust noises to such an extent that one can describe this new DKW as a remarkably quiet motorcycle.

The 4-speed gearbox is exactly tuned in its gear ratios to the engine performance. If meets all practical demands and enables - together with the "over-revving" capacity of the DKW two-stroke engine - astonishingly high cruising speeds. For example one can accelerate with perfect ease up to 18.6 m.p.h., in 1st gear, in the second up to nearly 37.3 m.p.h, and in the third even up to 49.7 m.p.h., and can then shift in to fourth without any noticeable reduction in speed. From a standing start the machine accelerates up to 56 m.p.h, in only 18 seconds, the maximum being 71 m.p.h. Naturally the new RT 250 is especially suitable for sidecar use. This is made possible by 14.1 BHP, the sidecar-tuned suspension, the closed, rigid steel tube frame and the excellently graduated gearbox. But seemingly small details have also been considered on the new DKW: The exhaust pipe is placed on the left-hand side so as to remove it as far as possible from the sidecar, an advantage which the sidecar passenger will gratefully appreciate. The description of this new DKW would, however, be incomplete if we failed to refer to the legendary economy of all DKW motorcycles, a feature which has been proved by hundreds of thousands of machines all over the world. It was also a fundamental principle, when designing the new RT 250, to build a machine that could be maintained by motorcycle enthusiasts of the most moderate means. So much for the technical qualities of the RT 250. Two other features however, should not be forgotten: The smart appearance due to the elegant flowing lines and the remarkable silence of the machine which is scarcely louder than that of a motorcar. Such advantages will always find the convinced approval of all motorcycle enthusiasts, and last but not least, also that of his passenger.

The design of the DKW two-stroke engine could not be simpler.
Piston, connecting rod and crankshaft are the only moving parts.
Note the crankshaft with full counterweights and three bearings; also the generator shown in the exploded view. 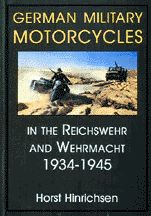