In 1926 Antonio Cavalieri Ducati and his three sons, Adriano, Marcello, and Bruno Cavalieri Ducati founded Società Scientifica Radio Brevetti Ducati in Bologna to produce vacuum tubes and other radio components. The business thrived, and in 1935 they built a new factory in Borgo Panigale.

In 1953, management split the company into two separate entities, Ducati Meccanica SpA and Ducati Elettronica, in acknowledgment of its diverging motorcycle and electronics product lines. By 1954, Ducati Meccanica SpA had increased production to 120 motorcycles a day. In the 1960s, Ducati earned its place in motorcycling history by producing the fastest 250cc road bike then available, the Mach 1. In the 1970s Ducati began producing large-displacement V-twin motorcycles and in 1973, released a V-twin with the trademarked desmodromic valve design, the iconic 750SS. 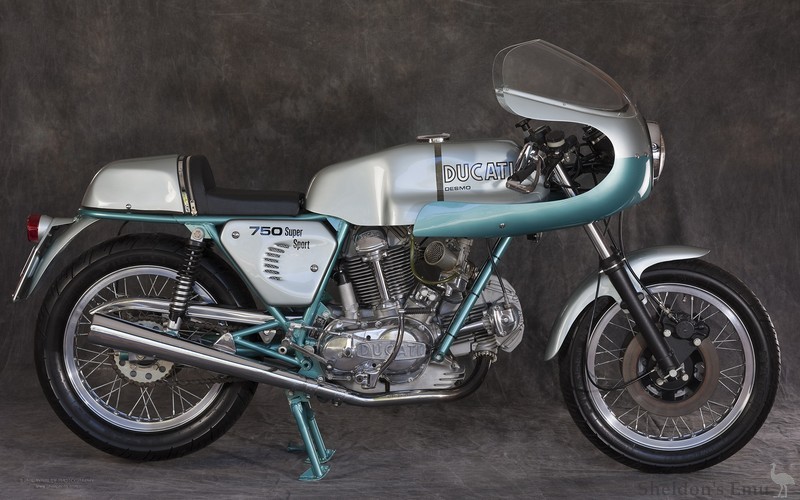 Ducati had risen from the ashes left by the Second World War with the help of both the Italian Government and the Vatican and by 1948 were once again producing radios, cameras, cinema projectors and, in a new field for the company, motorcycles, in the form of the Cucciolo 48cc "clip-on" engine, a project they had bought from Siata of Turin. They had developed it with a man named Capellino in 1946, and the machine became quite famous in Italy as the CCC, the Cicli Capellino Caproni.

The success of the Cucciolo prompted the creation of a complete motorcycle, initially in partnership with Aero Caproni, who built the frames at their factory in Arco. This arrangement continued until 1950.

More on the Cucciolo

A new range of single cylinder machines in the 65cc class using push rod valve operation quickly grew to encompass 100cc models. The 1953 Milan Show witnessed the introduction of the first sports model Ducati, the 98S, powered by a tuned version of the ohv engine. Although successful commercially, the little machine was outclassed by its rivals when used in long distance races such as the Giro d'Italia and the Milano-Taranto.

Success in these events guaranteed increased sales in the increasingly competitive Italian market and prompted Ducati Meccanica to employ Fabio Taglioni, a man well known for his work with Mondial, to design a new engine capable of competing with - and beating - the competition.

Taglioni had graduated from Bologna University before becoming part of the successful FB Mondial team. On joining Ducati, Taglioni undertook the design of what was to become the 98cc Gran Sport, or Marianna, a machine that would dominate its class in long distance racing and lay the foundation for the development of the hugely successful overhead cam and desmodromic singles that the firm would produce in the 1950s and '60s.