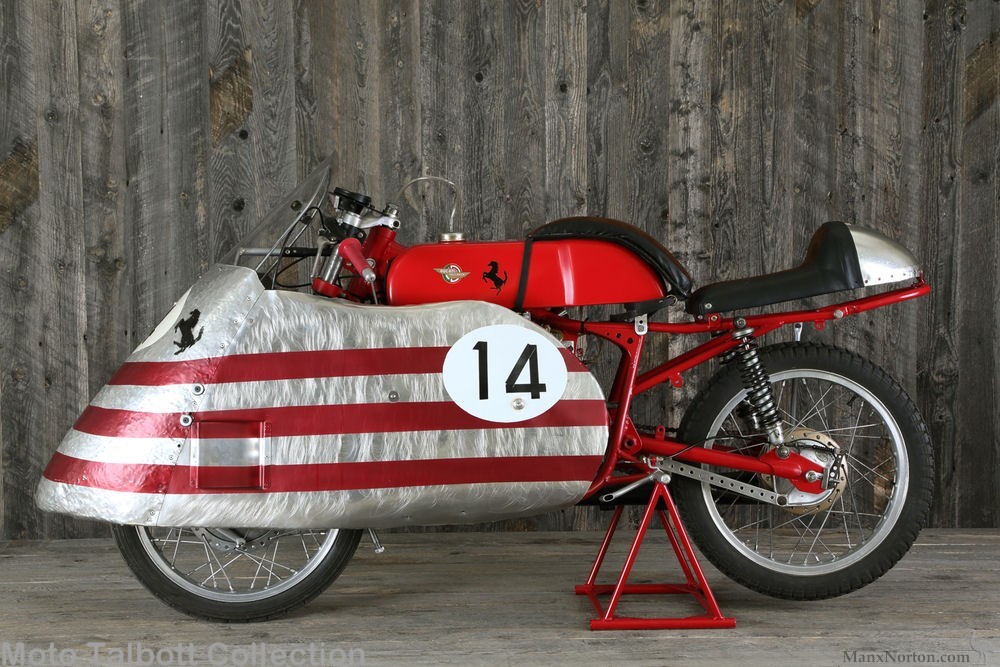 Fabio Taglioni was responsible for the design and development of the OHC Gran Sport, which was built with engines of 100cc and later 125cc. Named the "Mariana" because design approval was received during the festival of St Mary, an important date in the Italian calendar at the time, the machines achieved immediate success. Revealed to the public in March of 1955, several were entered in the Giro in May of that year where they dominated the 100cc class of 3400km race, taking 1st, 2nd and 3rd. They also beat all of the 125cc class machines.

The motorcycle pictured is that of Italo Piani, a very talented privateer who built his own dustbin fairing and made numerous other modifications to the machine with which he won the Italian Championship in 1956 and 1957.

Dustbin fairings were very aerodynamic and improved the top speed, but proved quite dangerous in crosswind conditions and were banned in 1957.

The Cavallino Rampante is familiar to all as the symbol of Ferarri. It is derived from that of WWI Italian ace Francesco Baracca, who painted it on his aircraft. Barraca's parents suggested to Enzo that use of the symbol would bring him luck, and he began using it in 1923.

Taglioni's father fought alongside Baracca in the 91st Air Squadron, and Fabio used the symbol on his motorcycles for many years. It is thought that an agreement between the two companies led to Ducati abandoning the Prancing Horse.

Enzo Ferrari on how he came to use the Cavallino Rampante, at eng.museobaracca.it/The-prancing-horse.