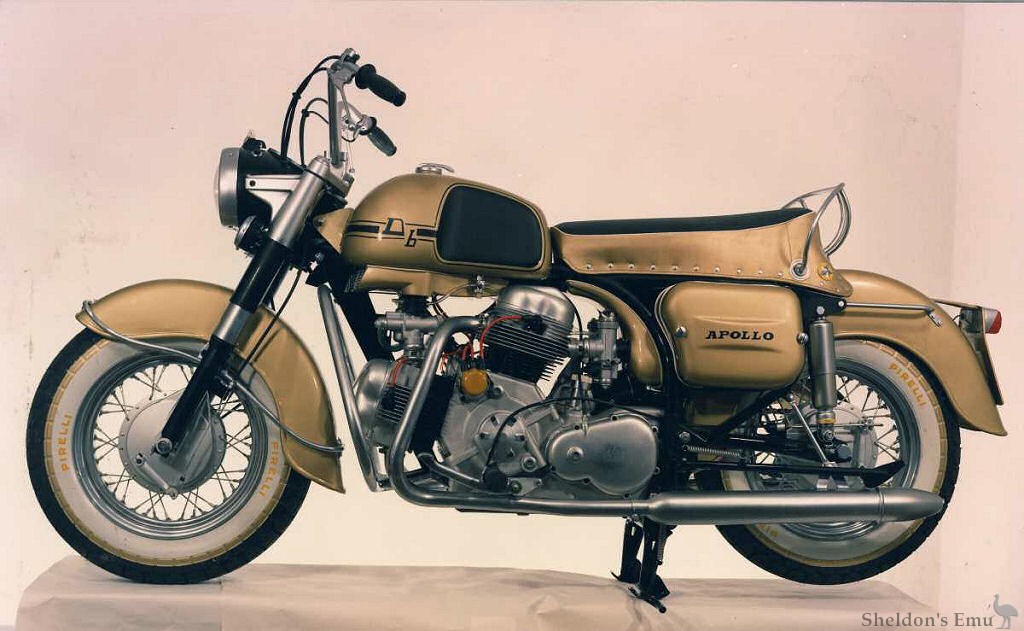 Back in 1963 Ducati produced a a 250cc OHC single as their largest motorcycle, so when the draft specification for the 1260cc Apollo landed on Fabio Taglioni's desk it was something very different in many ways.

Ducati's American importer, the Berliner Corporation, requested it in order to attempt to break into the US police bike market. They envisioned it being developed into a custom bike for the civilian market once it had proved itself as a competent and reliable machine.

Taglioni had actually sketched out plans for a V-4 250cc machine when he was at university, so the idea was not new to him. Berliner had agreed to finance the project and specified that the new machine be a minimum of 1200cc and have a 60-inch plus wheelbase with 5" tires on 16" rims to meet police requirements. They also mentioned shaft drive in their brief!

Taglioni shelved the cardan concept due to the weight and complexity, instead using two chains to handle the power. He also decided not to use water-cooling, again for weight reasons, although when you consider the finished bike weighed in at 576lbs, a few more pounds would not have made that much difference.

The finished design used a single gear-driven cam in the center of the "V" to operate the two valves per cylinder. These were opened by push rods and had screw-type adjusters. The design was influenced by a pre-war Guzzi racer with a horizontal front cylinder, although Taglioni changed it to a 90-degree vee as opposed to 120 degrees to combat vibration problems.

The engine was an over-square 84 x 56mm bore/stroke giving the all-alloy unit construction an capacity of 1257cc. For such a large and complex powerplant it was remarkably compact, measuring just 17.7 inches across.

Despite being designed for torque, a five-speed box was fitted when a four would have done. Primary drive was by gear through a seven-plate wet clutch, although it was designed to take a Sachs variable-speed automatic transmission at a later stage. A kick-start was provided, and it was also fitted with an electric start similar to that used in a Fiat car of that era.

The ignition was probably the most complex part of the motor with four sets of points, four condensers and four HT coils bringing the motor to life. Two sets of points were driven off either end of the camshaft. As one might expect, it came with a high-output 200-watt generator to cope with the expected fitting of flashing lights and sirens for the police market.

The engine was used as a stressed member of the frame, which was a combination of steel tubes and box sections. Specially constructed Ceriani forks and suspension units provided the springing, while the 16-inch front and rear wheels were interchangeable.

A two-carburettor version was made which produced 80bhp, but the four-carb version kicked out 100bhp and was capable of 120 mph. And that was where the problem lay. The bike was far more than the existing tires of the time could cope with and no tire manufacturer was willing to make special ones for the Apollo.

The solution was to detune it to 67bhp, which cured the problem, but now it suffered against the competition in the power-to-weight area. As a result, the management deemed it as too much of a financial risk and the project was abandoned. Sales literature of the time shows it would have cost $1500 and it was due to go on sale in 1965.

Until recently it was believed that only one motorcycle and one spare motor was made, but now Livio Lodi the curator at the Ducati museum believes that two bikes and two engines were constructed. One motor without internals sits in their museum and then there is the complete bike tested here with the engine number DS2. The whereabouts of the other is, as yet, unknown.

This, the only remaining example, is owned by Japanese collector Hiroaki Iwashita who bought it for $16,000 in 1986 from Domi Racer in the USA. They had acquired it directly from Berliner where it had sat since the project had been abandoned. As a result the bike was in a sorry state and not running. Recent negotiations between Ducati and Japan have resulted in the factory restoring the bike to running condition, which has taken over a year of painstaking work. Iwashita will not sell it but has agreed to loan it to the Italian museum (2002 to 2003). [1]

Its first public outing as a mobile fully-functioning exhibit was at the famous Goodwood Festival of Speed where I was given the chance to ride it up the famous mile hillclimb in front of 130,000 people and TV cameras.

While very much an honor, it was also a worrying time especially when you realize it is unique and almost priceless, a fact pointed out by Livio on several occasions! However, kitted out with a police jacket over my leathers and a police crash helmet, I felt that at least I looked the part and would not be tempted to speed!

Sitting astride the machine you do not notice the same level of bulk that you do when looking at it side on. The petrol tank is tiny in comparison to the rest of the bike as well. Starting is a breeze: taps on, open the choke and then just turn the key in the top of the headlight. The starter whirrs the bike into life and it quickly settles down to an even tick-over with the choke backed off almost at once.

You notice how light the cable-operated clutch is and also what a long throw the right-footed gearlever has as you nudge it into first. The motor pulls cleanly and you quickly note the smoothness of the machine. Like any large bike, once under way you do not notice the weight, but in fairness it is a well-balanced machine with good steering lock as you might expect for one designed for the police.

Unfortunately the clutch was prone to slipping when you tried to accelerate...

The gearbox is very slow in operation and what with the long throw of the lever, so it is easy to get lots of false neutrals unless you take your time. When you do open it up you notice how smooth the motor is and at the same time you still realize you are on a Ducati although the exhaust note from the dual two-into-one system is very different compared to the modern underseat versions.

The bike has a comfortable riding position and gives confidence. That is until you crank it into a bend and realize what the testers in the sixties meant about the whitewall tires. Now considerably older, they inspire even less confidence, likewise the brakes!

Despite their size, the single-leading shoe front and rear brakes are very much for show and you have to rely more on engine braking to slow you, using the brakes only to come to a complete stop. When you did, you certainly became the center of attention.

Views on the styling were mixed, but most found it favorable and were amazed that such an advanced bike was on offer in the early sixties. Personally I quite like its distinctive looks, and the bike in general, and I was quite sad to see it crated up to go back to Japan. Whether it comes out again is still under negotiation between the owner and the Ducati factory.

But my brief ride shows that the bike had the basics to do well and in a lot of ways could have gone on to become a market leader had a tire manufacturer made suitable rubber. It also leads you to wonder if it had been a success, would Ducati have been producing V-fours long before the new Desmosedici GP bike? History may well have been very different indeed!

Adapted from an archive of an article written by Ian Kerr of wordsrider.com available at moto-euro.com The moto-euro.com has been offline for several years.

Notes
1. The Apollo V4 is kept in a private museum in Yufuin, Japan.
2. When Ducati scrapped the Apollo project, Berliner approached Moto Guzzi, resulting in the Ambassador and El Dorado finding a place in the police forces of the United States. The Guzzi shared a trait with the Apollo - abysmal brakes.