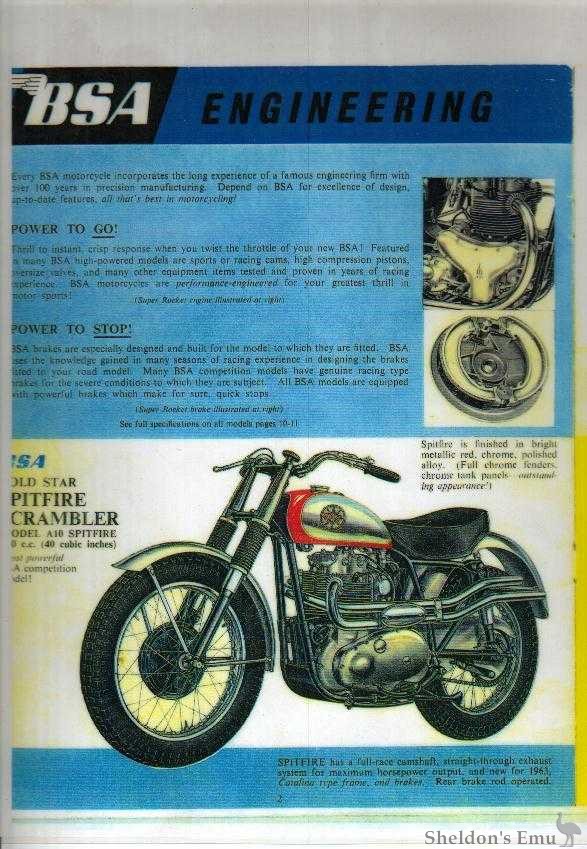 Lee Slocombe in Australia sent me this color brochure scan.

These bikes were also referred to (in UK BSAOC maintained factory dispatch records) as Rocket Gold Star Scramblers. According to one source, the gearbox should be stamped "STB" on these models according whereas the West Coast Catalina Gold Stars that same year were stamped "STBT". But another source indicates it should have an stbt or arrt gearbox. Brett's gearbox has no stamping. Mine is stamped "STB" and Lee's is stamped "ARRT". Peter's was stamped ASCT.

Frame Numbers on these models should be GA10 just like the RGS although apparently some had GA10A stamped on the frames. Eng No. should be DA10R or DA10SR (it can be either). Frames did not have any pillion loops, although Lee (mentioned previously) owns a '63 RGS Scrambler with a full clubmans trim frame!! Per a page in the the UK BSAOC Star magazine, 272 Goldstar Spitfire Scramblers were made, and per another source all went either to Hap Alzina, or Nutley, NJ. There much the same as a "Normal Spitfire" except for the Four lug frame, usually low Goldie Scrambles 'Bars, Red fuel Tank, single sided Goldstar brakes, rubber fork gaitors, single seat, clamp-on foot pegs. Note: Four lug frame means that on the front down tubes there are 4 cast motor mounts, two top and two bottom, unlike just two top ones that all the other A&B series bikes had (including Spitfire Scramblers up to '62); the bottom motor mounts were welded on bits of tube.

The 358 cam was a option after you bought the bike with most apparently having the 357 cam.

Charles Falco quoted the 1963 West Coast BSA brochure which has "The Gold Star 650 Twin," which is the 'clubmans' version, as well as the "new for 1963... "BSA Gold Star Spitfire Scrambler." The relevant things from this brochure are that the bike "now has the lightweight Gold Star frame, Gold Star Catalina type brakes front and rear (i.e., the half-width front brake), sports tank..."

Charles has the very first Spitfire Scrambler (serial no. 1). The U.S.-only model was made in 1957 with Gold Star Catalina frame and components, then they switched in '58 to using standard A10 parts, and finally in '63 reverted to putting the engine back in a Catalina-type frame (no passenger loops, no lug for a fork lock, etc.). The Gold Star 650 Twin, occupies most of the space in the sales brochure, with only a small spot for the Spitfire, indicating that far fewer of the latter were available for sale.

I have had discussions with Bud Kubena who rode a buddy's 1963 Goldstar Spitfire Scrambler in the year of 1964 (when it was still stock) and he told me what he could recall about the bike. He said the paint was flamboyant candy apple red on the tank with a gold pin strip (same color red as a BSA lightning or RGS). He said the chain guard was chrome. The tank was the 2.5 gallon goldstar tank. He thought it had the optional lighting kit on it. Front fender was same as a RGS (he thinks with rolled front lip and cut in back). He could not remember if it it had gauges or not on it but thought it had one gauge mounted on it.

These images above were clipped from two different 1963 brochures and the last one was clipped out of a 1963 issue of the Motorcyclist!

The above two tables are an excerpt of literature sent to me by Don Bachtel with specifications on the Goldstar Twin, I believe it was part of the same sales literature booklet as the page scanned in color at the top of this page. If anyone has a better quality scan of these tables (especially of the 2nd table), please email me a copy. 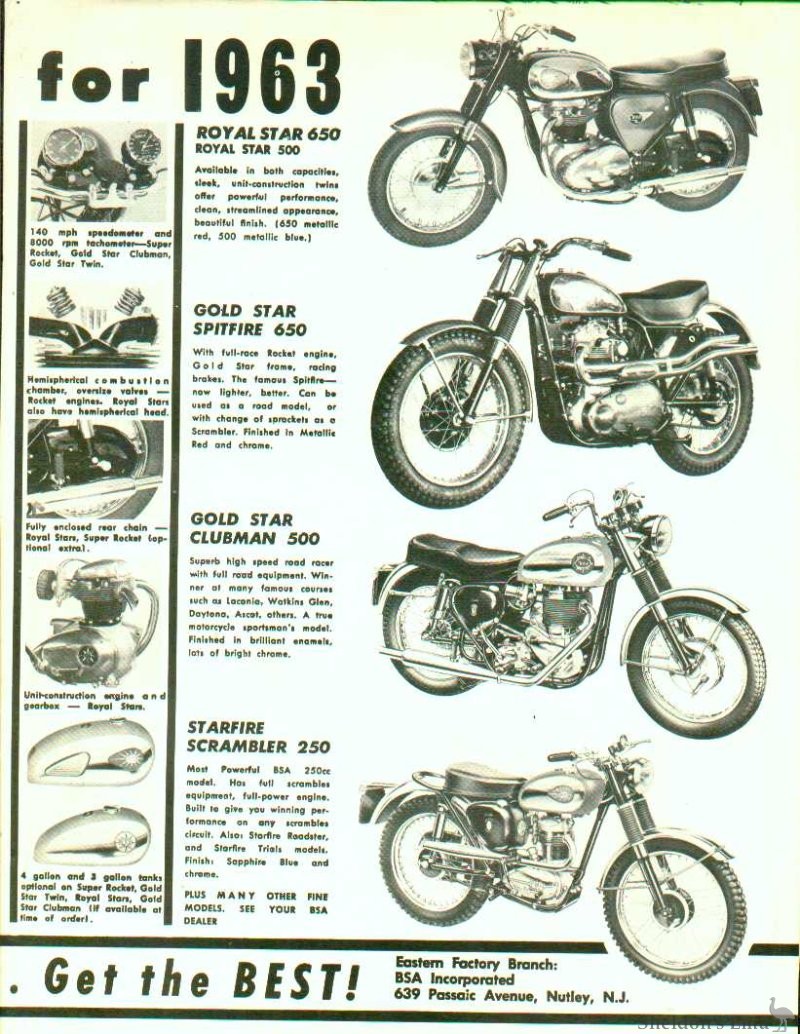 Above shows part of a two page ad depicting the '63 Goldstar Spitfire from page 4 of Cycle Magazine's February 1963 issue.

Special thanks go to Lee, Don Bachtel, Bud Kubena, Charles Falco, Peter Dietrich, and Brett Matthews, for supplying me most of the information on this page! Check out Lee Slocombe's (a.k.a. Speedy's) website, Lee's Speed Racing for a great source for Spitfire Scrambler accessories. Lee's has informed me that he is about to make a batch of scrambler pipes, so if interested, you might want to drop him an email! (leespeedracing.com 404)