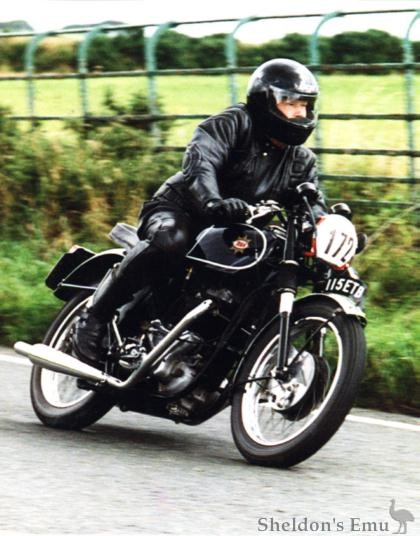 John Preston 's BSA A10 was purchased in 1967 for seven pounds ten shillings. That is photo of him riding in the VMCC closed roads run at the Isle of Mann at Ginger Hall corner in 1996.

The motor is a 1957 A10. One piece crank, manual advance and retard, 76-357 camshaft, 9:1 pistons, alloy head and a 1 5/16 monobloc. The clutch is a Triumph part and the engine has a 23 tooth sprocket gearing is 20mph per 1000 rpm. The front forks are Eddie Dow two way damped with a TLS on the 190mm. The rear end is pure Goldie. The frame was originally A10 but it had the four forged lugs on the front down tubes. I reduced the diameter of the holes in the gusset plate to take the goldie S/A pin and welded the lugs for the rear sets, which are genuine Goldie. The five gallon tank is Goldie