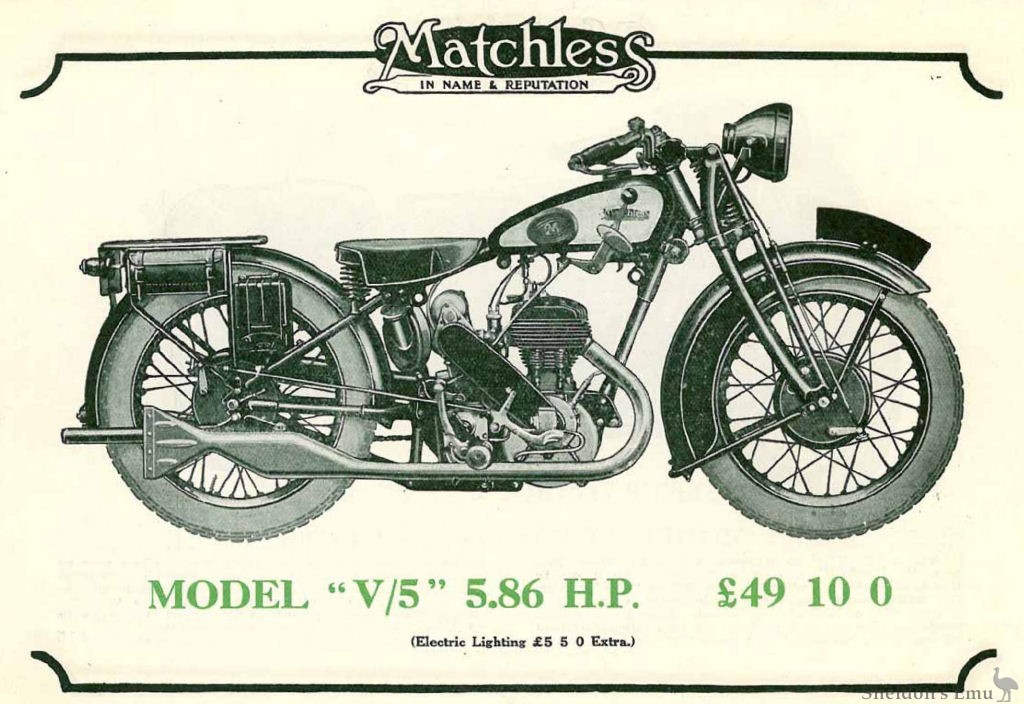 This entirely new Model is a "Big Single," designed to meet the needs of those who require a machine of the very highest class, capable of the heaviest work, and who prefer the economy and sturdiness of a single-cylinder engine. In general specification, the Model "V/5," is similar to the Model "V/2" Super-Sports described on page 13, but the engine is of the side-valve type, with detachable cylinder head, and is remarkable not only for its high maximum power, but for its pulling power at comparatively low engine speeds.

The general specification is similar to the Model " V/2." Below will be found particulars of those features in which the Model "V/5" differs from the Model " V/2" described on page 13.

ENGINE. Single-cylinder 5.86 h.p., 4-stroke engine, designed and built in the "Matchless" Factories. A detachable cylinder head is fitted, so arranged that by the removal of seven accessible bolts the whole head can be detached and the engine decarbonised, valves ground in, etc. The joint between the cylinder head and cylinder is sealed by a special copper-asbestos gasket. The combustion space is designed in accordance with the latest scientific principles to promote stream line gas flow, and consequently the engine is notably free from any tendency to "pinking" or "knocking." Large valves are fitted, with valve passages of adequate size and stream line form. Other features include aluminium piston with full floating gudgeon pin, roller big end bearing, heavy flywheels to give good slow running, etc.

FOOTRESTS. Large rubber-covered footrests are provided as standard, but folding footboards can be fitted if required a5 small extra charge.