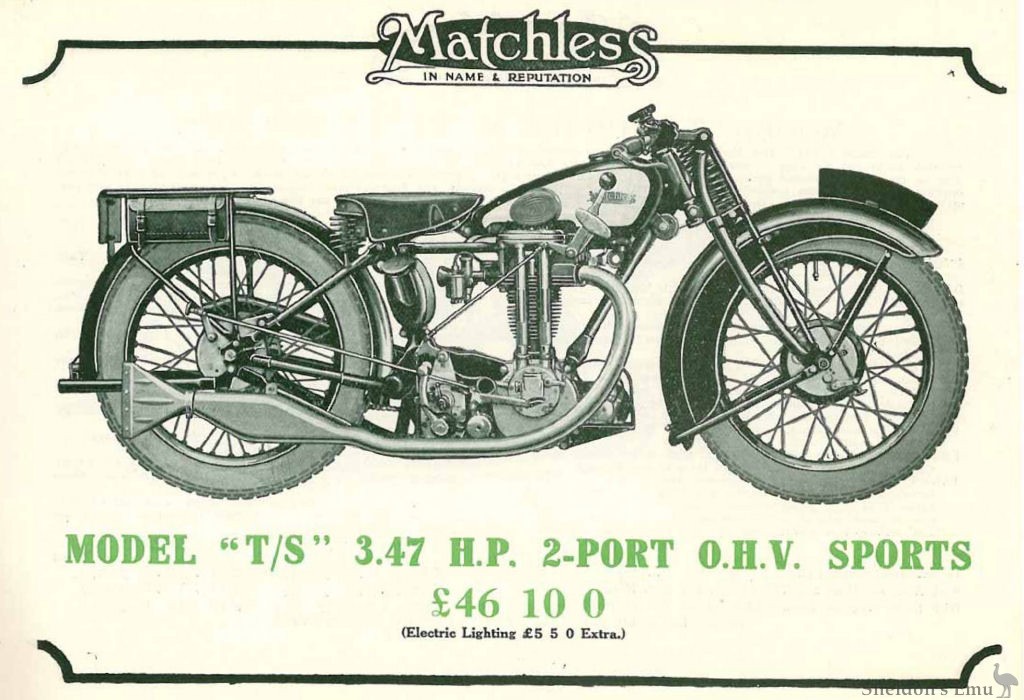 Immediately upon its introduction for the 1928 season, the "Matchless*"Model " T/S" took front rank among sports machines of its class. The improvements incorporated for 1929 will place this Model beyond competition and include increased ground clearance, stronger fork girders, larger steering head bearings, improved shock absorbers instantly adjustable while the machine is in motion, finger-adjusted brakes, and totally enclosed roller bearing overhead valve gear.

A special edition of the Model "T/S," known as the Model "T/R," can be supplied at an extra charge of £5 on the prices shown below. This Model possesses certain modifications to the engine, including a direct oil feed to the big end bearing, and "V/2" type timing gear, which make it especially suitable for competition work.

MODEL "T/S" ENGINE. "Matchless" 3.47 h.p. o.h.v. two-port Sports engine, designed and built in the "Matchless" Factories. Large inclined overhead valves, operated by push rods and overhead rockers, the rockers being enclosed and working on large diameter roller bearings in an aluminium overhead rocker-box. The push rods are totally enclosed by spring-loaded tubes, so arranged that when tappet adjustment is required, the bottom portion of either tube can be pushed up with one motion of the hand, to rest on a projecting cylinder fin in such a position that the tappet adjustment is immediately accessible. Heavily finned two-port cylinder head of latest design, aluminium piston with floating gudgeon pin roller big end bearing, and all latest features. Bore, 69 m.m. Stroke, 93 m.m. Capacity, 347 c.c. Maximum power, 16 B.H.P.

ENGINE MOUNTING. In addition to the very rigid mounting provided by the "Matchless" trussed frame with the duplex torque stays attached to the bottom of the crankcase, the engine is held at the top by the offside tank rail, which is split and rigidly bolted to the overhead rocker-box. The torque reaction set up by the highly efficient engine is thus completely absorbed.