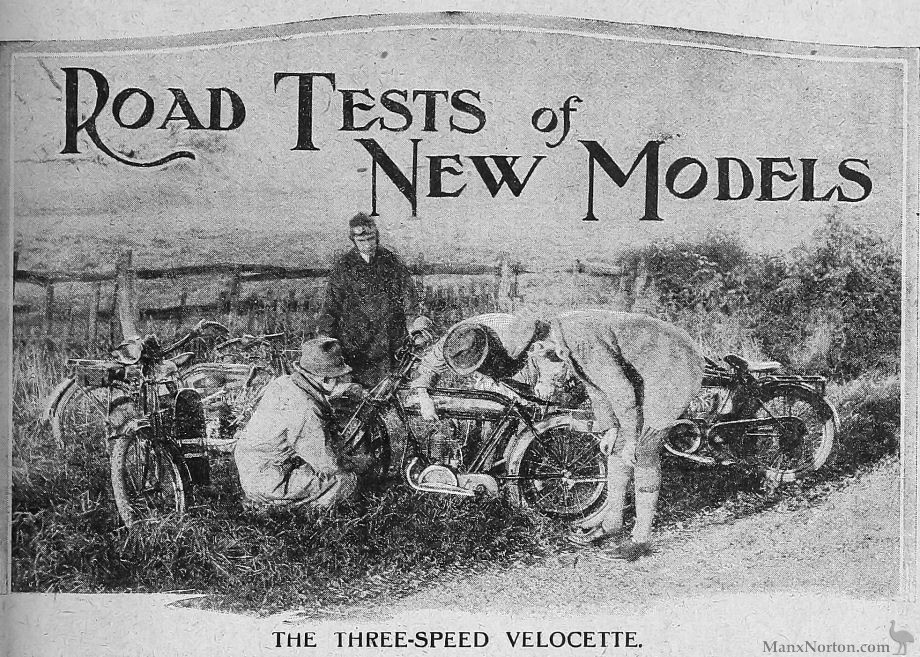 Although one of the smallest of mounts, the Velocette affords a comfortable riding position for the tallest of men.

Although only 220 c.c., the Velocette can maintain quite a high average road speed without unduly forcing the engine.

THAT a lightweight team should be one of the runners-up for the team prize in the A.C.U. Six Days Trials is an achievement that brings forward the possibilities of this type of machine. Messrs. Veloce, Ltd., are the manufacturers of the little machine which thus distinguished itself, and therefore it was with considerable interest that we took over one of the identical motor cycles which contributed to this success. It was not long before we realised that as regards power the machine was fully capable of tackling any hill on which wheel grip could be obtained, for quite severe gradients could be ascended on the highest of the three gear ratios.

Critics will at once imagine that the engine was under-geared, but this contention is at once refuted by the speed attained under ordinary road conditions. It will be remembered also that at the conclusion of the trial one of the team attained a speed of over 40 m.p.h. on Brooklands. The Velocette is one of the few machines which gives the impression of being designed throughout with the idea of forming a uniform whole rather than a series of assembled units.

Having a cylinder of 62 mm. x 73 mm. (220 c.c.) of the normal three-port type, the engine is a self-contained unit, including a large oil sump and mechanical oil pump. This pump is an extremely pretty piece of work, having a combined rotary and reciprocating motion. The flow of oil is adjustable, and the pump may be relied upon to do its work with absolute regularity and thoroughness. This system is more cleanly than the "Petroil" system, and is probably more effective, since the oil is definitely delivered to such parts as are most in need of lubrication. Chain drive throughout is an uncommon feature on lightweights, nevertheless the Velocette is so equipped, and the chains are protected by an ample metal shield. Both two and three-speed models will be marketed for 1921, and "the machines used in the Six Days Trials were fitted with the latter type.

Constant mesh gears, locked by a simple form of dog, are employed, and the changes are effected by a neat lever which is rotated by the right hand. The gears change easily, but the operating gear requires a little practice, probably because the motion is not one to which the average rider is accustomed. Both brakes are of the internal expanding type, and function smoothly and powerfully, and the mudguarding appeared very satisfactory, though owing to good weather conditions, this was not fully tested during our trial.

Up to a speed of 30 m.p.h. the engine runs smoothly and pulls magnificently, but if driven at much in excess of this speed a certain amount of vibration is noticeable in the handle-bars, which increases with the speed.

This is, perhaps, our only criticism of a machine which is replete with refinements, and it is not of any great importance, since it is seldom that the rider of a lightweight pushes his machine above this speed.

Throughout our trial, which extended over several days, the Velocette ran regularly and well, with the exception of a mysterious magneto trouble, which prevented a start on one morning, through the entire absence of current at the high-tension terminal. This trouble was overcome after a short period of drying.

Aluminium footboards and a large saddle help towards making the Velocette the serious touring proposition which it undoubtedly is, and in conclusion it may be stated that we know of no genuine lightweight which is more capable of undertaking hard, work with fewer symptoms of drying up.

Velocette at the Olympia Show 1920

An example of the 2½ h.p. Velocette with M-L Maglita lighting and ignition set.
The 1921 Velocette has an internal expanding front wheel brake.

As the Velocette was recently described in The Motor Cycle, only a short resume of its most prominent points will be given here. One of its chief attractions is the complete mechanical lubrication, which relieves the rider of all responsibility beyond refilling the sump every 500 miles or so. On one of the models exhibited, the M-L magneto lighting set is fitted, making an admirably complete machine. The sectioned engine and gear box, which show the action of all working parts, also create considerable interest.

A lady's machine, selling at £88, is also shown. It has a three-speed gear, and is of similar specification to the other model except for its frame. The 24in. wheels provide an extraordinarily low saddle position, the top of the saddle being only 26½ in. from the ground. Unlike many ladies' models, the petrol tank is of full capacity, holding over two gallons.

A competition model, with three-speed gear and expanding front brake, should be specially noted on account of the excellent show which the firm's team put up in the A.C.U. Six Days Trials, in which they took third place for the team prize against much more powerful machines.

The price of the three-speed model is £85. All-chain drive is an unusual feature on so small a machine, and the Velocette gives the impression of having been "designed" throughout. The detail work is well carried out throughout, and its all-black finish, relieved by gold lines, is specially good.