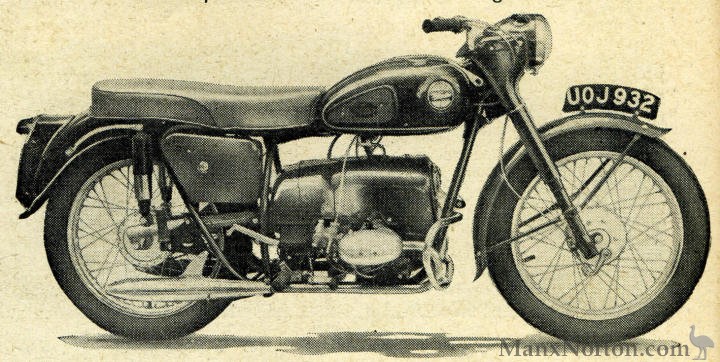 The Valiant was announced in the press during November 1956 and seen by the public later in the month at the Earls Court Show. Again, this machine suffered from an under-sized engine and was too small, too costly and not quick enough. However, purchasers gained a sophisticated machine, on which Veloce had spared no expense in manufacture. The layout of the Valiant engine and transmission was just as that for the L.E. but many of the details differed in some way or another. Apart from the more obvious changes, the engine was now air-cooled and with overhead valves. The big ends were widened giving more offset to the cylinders and making the crankcase larger. This was necessary to cater for the increase in power achieved by use of the o.h.v. system. The cylinders were of cast iron with steel pushrod tubes and alloy heads. The valve seats were shrunk into the heads along with the valve stem bearings. The existing Miller generator was used but with a different advance/retard unit to the front end. The tappet access holes, for the side valve unit, were cast over and made integral with the main crankcase. The lubrication system was the same as the L.E. but with extra pipes feeding the overhead valve system. The oil filter was re-located to the underside of the clutch housing. The clutch and four speed gearbox were as described for the Mk.3. L.E. and the final drive was via the new cast aluminium pivoted fork. The drive was fed through the left leg via a universal joint and propeller shaft. At the rear end went the bevel box, as on the L.E., complete with brake and drive to the quickly detachable rear wheel. The fork pivot was as for the L.E. together with the seal to protect the universal joint.

The complete engine and transmission unit was mounted in a duplex frame with a single top tube. This supported the unit with the mounting under the front of the crankcase and from the back of the gearbox to the rear fork pivots. The frame was well gusseted around the headstock area and the sub frame was formed in one with it. Footrests, pillion rest brackets, centre stand, rear brake pedal, gear pedal and a neat chrome plated tubular crash bar all bolted into place. The front suspension was as the L.E. forks but with sports mudguard with a cross stay on each side and a front number plate. At the rear a pair of Woodhead-Monroe spring units with hydraulic damping controlled the movement of the pivoted fork, along with a sports type mudguard carrying the rear number plate system. A 3-gallon tank was rubber mounted and held in position by a quick release centre strap. One of the main styling features of the bike was the two piece cowling that enclosed most of the crankcase and gearbox and carried the horn mounted in the front. Twin Amal 363 monobloc carburettors were fitted to short stub inlet manifolds that were linked via a balancing tube. The exhaust pipes ran back under the barrels to torpedo shaped silencers. A toolbox was fitted to the r.h.s. which also contained the 6 volt battery. A matching box for the l.h.s. was available as an extra. Road test showed that the machine was capable of 60 mph at 7000 rpm (recommended as a maximum by Veloce)

The drawing below shows the compactness of the Valiant engine. Note the simple valve clearance adjuster employed in each head. The camshaft differs from the L.E. with cams to suit the o.h.v. system. 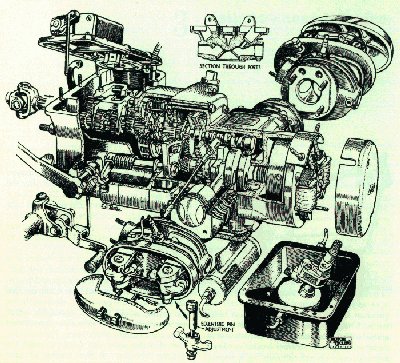 The duplex frame with the petrol tank mounting rubbers in situ. The petrol tank had two separate compartments to allow the top frame to pass through and therefore two petrol taps which linked via a filter within the engine cover. 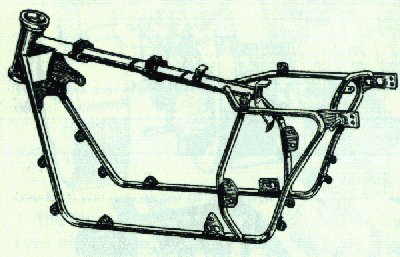 Advert of the day tells it all! 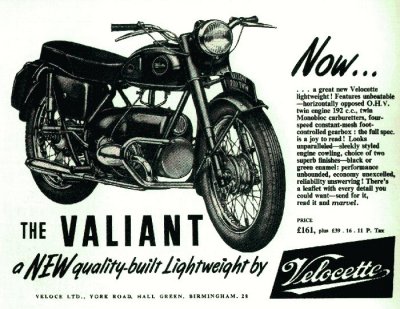