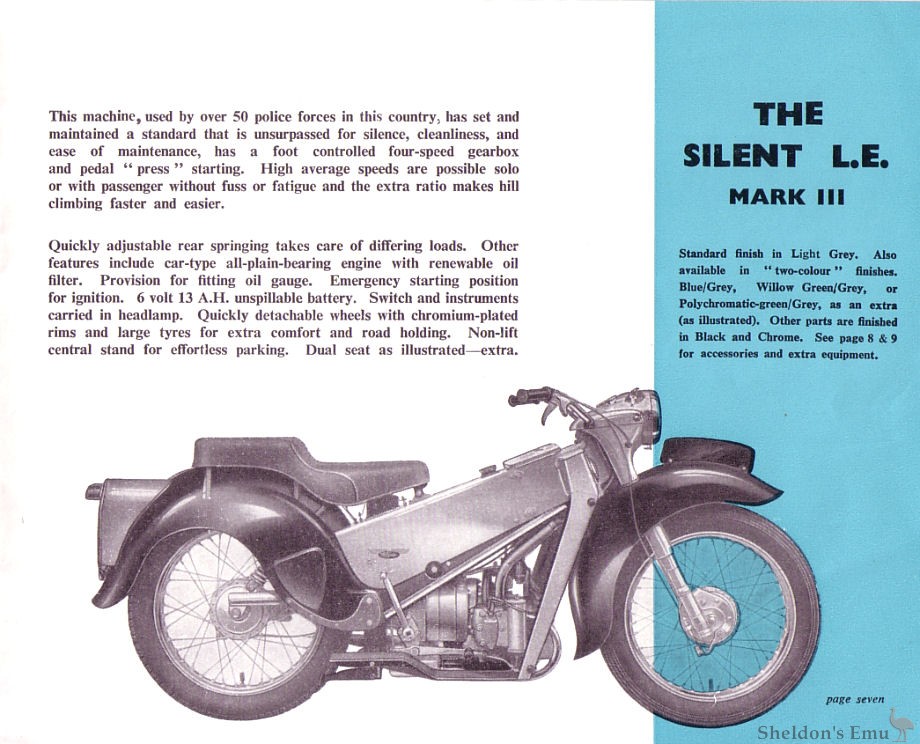 In 1958 Veloce recognized that the time for the hand gear change and hand starter had passed, and with the introduction of the Mk.III. the foot change and kick-starter were put into production. At the same time the gearing was increased to 4 speeds. Against all speculations that the engine size would be increased to the popular 250cc the 192cc engine remained. It transpired that the cylinders could not take the extra bore due to the close proximity of the waterways. However a little extra performance was achieved by the introduction of the 18" dia. wheels. Using the nacelle and head lamp from the recently introduced Valiant (see below) provided a new look. The Miller electrics was now shared with a similar Lucas system of 12 volts, mainly introduced for the police, as they required heavy power use due the introduction of radio telephones.

Other minor modifications were carried out and to list a few:-

The instruments moved from top of the legshields to within the new head lamp. The petrol tank capacity was increased from 1.25 to 1.62 galls. and moved to allow the new re-route of the speedo cable to the headlamp. The choice of an oil pressure gauge was now listed as an option. The horn was removed from the front mudguard to the offside legshield. Modifications to the oil circulation were carried out and the depth of the sump increased to allow more oil to be stored. The licence holder was now moved from the unique position on the front number plate to the left-hand side legshield.

The bike had now come to the end of its development and owners say this was the best of all the marks, it being a lot safer and easier to change gear by foot, with hands remaining on the handlebars at all times. The engine was now sharing most of the running gear modified for the Valiant and was strong and reliable. Windscreens now became a viable proposition and were offered as extras along with a choice of colours.

The end of production, sadly, came in 1970, the year Veloce went out of business. Till then the police were the main customers but profits had to be cut to maintain the sales. Kent County Constabulary, despite the onset of vans and Panda cars, bought up over £11,000 worth of spares and with some improvisation and cannibalisation, kept the remaining L.E.s in service for a further seven years. Their high regard for the machines, which outlived every other type of light motorcycle they had put into service, is eloquent testimony indeed for the L.E. from the real, hard world.

This drawing shows the new 4-speed gearbox and kick-start. The original 3 speed box was maintained, the 4 speed gears fitting by mounting the selector segment within the cover as shown. Note the simplified Amal 363 monobloc carburettor.

The following drawing shows the complexity of the sub frame and cooling system. On engine removal, the front frame as shown was split at the foot and remained connected to the main frame.

This drawing shows the internal plumbing of the final design of the oil distribution system. The oil pressure relief valve was mounted on the outside of the crankcase for ease of adjustment. The engine ran at 30 lbs/sq in at 30 mph.