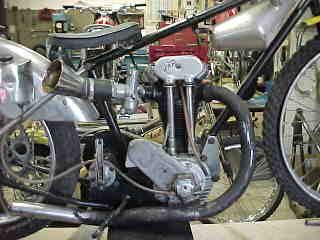 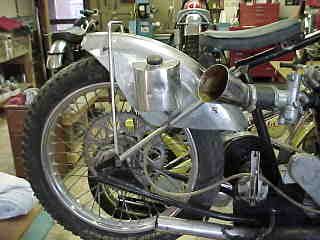 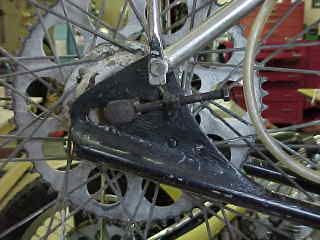 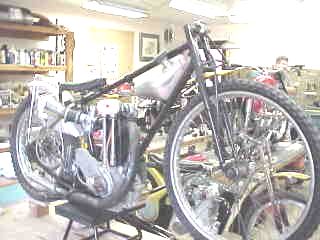 
To discover the story behind one of the greatest machines ever to be built, we need first to turn the clock back to the late 1940's. It was then that a gentleman named Freddy Prince formed the Rotrax company in a cycle shop in the city of Southampton where craftsmen began the famed Rotrax lightweight cycle frames.

It was to be later, in 1952 that Rotrax started to produce their first speedway motorcycle frames. Mike Compton, who was the Workshop foreman, together with the British Oxygen Company, developed a nickel-bronze brazing technique for the frame lugs and "Renolds 531" tubing that was to give the beautiful hand-built frame the strength and quality needed for track racing. This method of brazing was later adopted by the aircraft industry on their jet engine frames.

Meanwhile, Alec Jackson (himself a former rider) had taken over manufacturing rights of the JAP speedway engine in 1951 and continued to hand build engines and spares for many years afterwards, later still to be taken over by George Greenwood.

The Rotrax frames were initially chromed by Blakes of Gosport and then sent on to Alec Jackson's in London for the fitting of a JAP engine. And so the Jackson-Rotrax was formed.

Pictured Above: The classic Mk1 Rotrax Speedway machine owned by Richard Snodin who has kindly submitted these pictures.
The earlier Rotrax Mk1 machines were fitted with 22inch rear wheel (as is Richard Snodin's machine above) whilst in 1956, this was changed to a 19inch rear wheel. Later still, the Rotrax Mk2 evolved which included an oil-in-frame lubrication system and a loop rear frame, but we shall look at that one on another page.

Footrest: Solid one-piece type supplied for fitting to R.H side to customers own positional requirements.

Amongst the ever growing collection of restorer Rick Newlee, you will find his latest addition, namely a Rotrax machine owned by the great Vic Ridgeon.

As is customary with Rick's work, he has spent endless hours restoring the machine to its former glory and ensuring no detail is overlooked. Rick first acquired the machine around eighteen months ago, and after the usual trials and tribulations, the Vic Ridgeon Rotrax now proudly sits in a purpose-built building along with the rest of his ever growing collection, all of which you will find throughout these pages.

It is hoped that a web page is forthcoming on Rick's "Mini-Museum", and of course a link will be added so all can see what is truly a remarkable collection. Back to the Rotrax, and below are just some of the pictures that Rick has kindly forwarded for me to add to my Workshop. Included is a picture of the Vic Ridgeon Rotrax taken at Peterborough in 1995.

Bob Allen's Machine
Restorer Bob Allen recently acquired a JAP from New Zealand that we believe to be a Rotrax Mk1 - unless someone knows different ! These are some of the photographs used in identifying this machine.
Bryan Lambert, "eagle-eyed" as ever, noticed the (possible) Rotrax Mk1 below is fitted with a 5-spring Burman clutch. They are not interchangeable with the 3-spring Norton units as fitted to Richard Snodin's bike Above.

About the Speedway Workshop Archive