The 125 4-stroke was introduced in 1958 as a replacement for the 125 2-strokes and the Fauno. Based roughly on the 98cc motor, the 125 came in 2 forms. One was a scrambler version built mostly for the USA market, and the other was a street racer copy of the GS called the Sprint. The first bikes had a frame that was missing the rear extensions for the rear fender and all motors up to around 1963 had no access to the clutch. Late 125 motors had a 4 bolt clutch access cover. The gas tanks changed as well from a round tank (same as the Tourist & Trailmasters) to a more square design. Best guess for number of 125 bikes built is around 2,200. 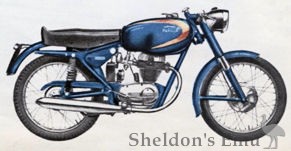 Even though Cosmo discontinued selling the 125 GS in the USA around 1961, one could still buy a Sprint in Europe. One of the few changes was a slightly modified version of the GS-style tank. New Sprints were sold well into the late 60's from leftover dealer stock.

125 frames: To compare the 125 frame to the similar, late style high-cam frame, check out the frames webpage.

Parilla 125cc Fourstroke Engine, from Above

Prices and colors: Almost all Wildcat scramblers sold in the USA had chrome fenders, red metallic frames, toolboxes, and a red metallic/silver tank. A few had a blue metallic paint scheme. The GS version had the standard black/silver colors. Prices were $439 for the Wildcat and $489 for the Sprint in 1961.

There is a parts book and an owner manual for this model, but no shop manual. The factory put out several one page color brochures of the Sprint, but Cosmo advertised the scrambler version much more than the Sprint. To see more 125cc brochures and other advertisements, click onto our 125cc paperwork page.

This model was a good seller for Cosmo. Almost all bikes sold in the USA were scramblers. Only one 125 GS has been located in the USA. The situation is reversed in Europe where there are many 125GS bikes, but very few scramblers. Most 125's were used hard and left to rust away. Also, many sheetmetal parts are interchangeable with other high-cam bikes, so some 125's get stripped for other restorations. There might be upwards of two dozen bikes surviving in the USA.