Have your Cycle or Motor Cycle built to your order and specification.

Agents for all the Leading Makes

Tyres and all accessories

Tell us your requirements; we offer you the advantages of our practical experience.

Harry H. Mercer built the machine in his workshop using a Minerva engine, and BSA frame components probably sourced from Healing. Only one was built. Later Mercer became an agent for agent for AG Healing & Co.

The Mallee appeared at the 1910 Warrnambool show. It appeared again at the 2021 show, having been restored.

L. Malpas of Bartley Crescent Wayville, Adelaide, built a Peugeot-engined motorcycle in 1913 or earlier. There may have been more than one.

Wyatt Motoria of Grenfell Street advertised a secondhand Malpas for £25 in 1919.

Information indicates that the machine pictured in the centre is a c.1903 Marsey which was produced in Tasmania. The machine on the far left is a Victor, probably from Hobart. Riders are P Harrison, T Abbott, G Jackson, S Spurling, and A Bosworth.

Other marques with this name: Disambiguation

Manufactured in Devonport by Don Cycle and Motor Works.

N.B. There was a "Massey Cycle & Motor Depot" in Benalla, Victoria, in 1913, and a Massey brand existed in Britain, but not until the 1920s - see Disambiguation

The Don Cycle and Motor Works, under the able management of Mr H. Westley, still continues to keep its place as premier cycle shop on Devonport. Here one found the "Massey" motor bike fitted with "Precision" engines in 2½, 3½, and 4 1/4 h.p. grades, priced respectively £55, ; £67 :10s, and £72 10s. This is looked upon as one of the greatest machines of the day and is a famous hill-climbcr, and :s also entirely free from all complications

In ordinary cycles the "Red Bird," "Tourist," "Dominion", and "Dandy" are stocked; all splendid..."

William McLean was head of an international hardware and machinery import/export firm with offices in London and New York. Head office was in Elizabeth Street, Melbourne. It is reported that their Adelaide branch built motorcycles in 1903, but no records have been found to substantiate this.

There are three possibilities, at least.

The riders of two motor cycles named, in accordance with the fashion of motor nomenclature, "Melba" and "Possum," decided to go east about recently, and it is in order to chronicle the experiences that befell them that these notes are written.

Possibly, readers of this column (who, by the way, are not all motorists) may wonder why such names for a contraption of steel, cast iron, aluminium, and india-rubber, but after all, there is a good deal of sentiment in most motorists, who regard their mounts in something of the same light as a horseman does his favourites.

"Melba," a powerful 5-h.p. twin Vindec, received her unofficial designation owing to her musical propensities when running at speed, whilst "Possum," a 3½-h.p. "Triumph." was christened thus from her climbing proclivities, a display of which was given on Maggs' Hill as the twain wended their "spirited" way Scottstdaleward...

Lucky's need for speed started early - at the age of ten, he says, he motorised a pram and drove it down the road in Dubbo, in Western NSW, a stunt for which he was fined £5/10/-. This may be true. His Merlin started life as the Rolls Royce engine in a Mosquito fighter plane in WWII. Lucky carved two cylinders out of it and added a supercharger and a few other bits to the resulting 5 litre V-twin to make sure it would deliver. It does 400 kph, he says. This may also be true. 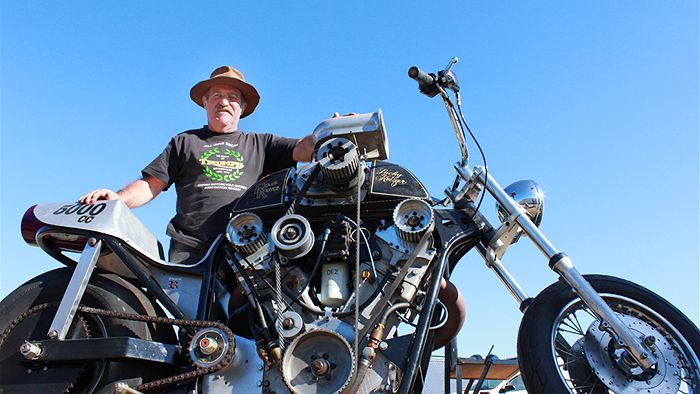 Appears to be a one-off, as this is the only mention.

Listed by Saward as a motorcycle manufacturer, in 1906 several advertisments ran along these lines: "Mumford's Motor Works, 230 Brunswick-st, Fitzroy. Repairs to Cars, Motor Launches and Motor Cycles."
Firefly and Mumford combined to offer a prize for a bicycle race, so it seems there was a relationship. Also, "Lucy Charlotte Mumford (born DODD), 1869 - 1926 - related to William Hill Dodd (her brother?) who was born on August 25 1888, in Firefly Creek Krambach NSW Australia." ~ Trove. However, the Mumfords in this reference hail from the mid-north coast of NSW - a very long way from Fitzroy.