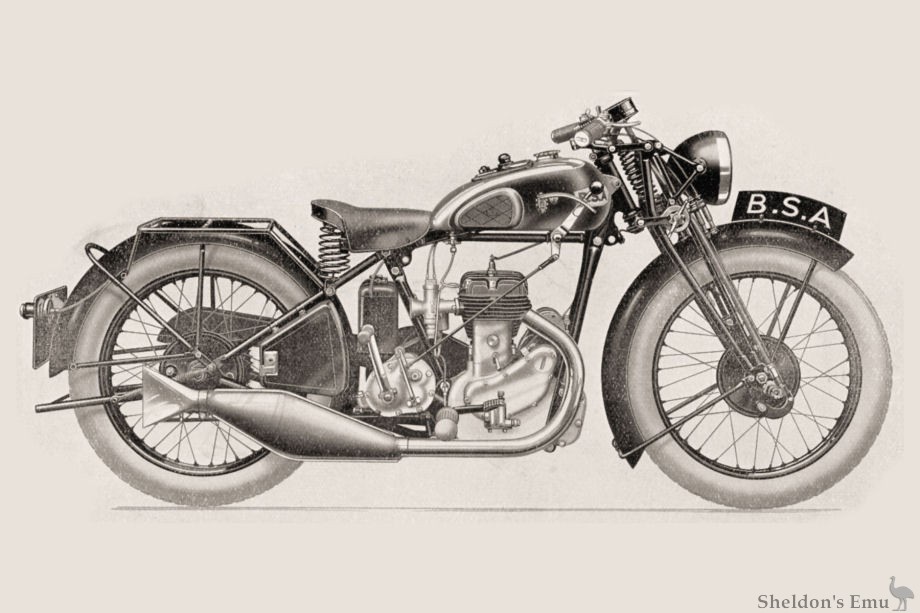 NEW SIDE VALVE B.S.A. IS SILENT AND POWERFUL

REMARKABLE SILENCE and smooth and powerful engine are attractive points in the 1932 S.V. 499 c.c. B.S.A. which was tested this week. It is also a most comfortable mount, and equipment includes a number of handy innovations.

A new machine introduced to South Australia, the S.V. B.S.A. is a fast and tractable mount. New features that have been incorporated include the new type high power detachable cylinder head, an improvement that will be appreciated: the B.S.A. four speed gear box, and coupled brakes.

When the new model was started up It was difficult to realise that the engine was in motion, when other traffic was about. The power unit mechanically was extremely quiet, while the exhaust was silent enough to satisfy the most severe of critics. With the correct setting of the controls, starting was a simple affair. One or two kicks, either with the engine warmed up or from cold, and the motor would respond instantly. The idling was slow and steady.

A light clutch action enabled smooth starts to be made, while gear changing was easy, although the change from second to third with the four-speed box a trifle stiff. Flexibility and a commendably smooth drive enabled the rider to remain in top gear to a speed as low as 12 m.p.h., the lowest non-snatch speed.

The engine proved to be somewhat of an 'eye-opener' to one accustomed to O.H.V. machines of the same c.c. capacity, in regard to acceleration and speed, while its pulling powers on hills was effortless.

The brake drums are of 7 in. diameter. The foot operating on the front and rear drums simultaneously, proved both smooth and effective, and capable of pulling the mount up dead with the minimum of effort on the part or the rider. It was found impossible to lock the wheels, regardless of the pressure brought to bear on the pedal.

With the hand adjustable fork damper slightly damped, the steering of the machine on rough surfaces was exemplary. Past cornering demonstrated the ease of handling, bends being taken with a feeling of complete confidence. Ground clearance was ample.

As with previous B.S.A. models tested, the comfort features were commendable. The handle bars are of the clean type, and the controls are well placed in a natural position. Finally, a word of praise for the B.S.A. tank mounted instrument panel, housing an oil gauge, ampmeter, lighting switch, and trouble lamp. The last named illuminates the instrument dials normally, but has 18 in. of flex attached, and may be used to inspect any part of the machine at night. Trove NLA - The Advertiser (Adelaide, SA) Thu 11 Aug 1932